My tire was somewhat under-inflated.

This I knew: When I came out of Walmart, the van was listing to one side.

So I stopped at Les Schwab and asked for air, where a smiling man in blue happily obliged.

Until he saw the state of my tires. Suddenly he popped up next to my window and gestured frantically for me to roll it down. The expression on his face said something like are-you-out-of-your-bleeding-mind-woman? and his words weren’t far from that. I actually thought he might give in to his baser instincts, leap through the window, and strangle me.

Who knew that 48,000 miles is too far to drive on factory-installed tires?

Not the woman with the bleeding brain, obviously.

Almost $800 (and not Les Schwab as the retailer/installer, thank you) I have a brand new set of Michelin tires that are guaranteed to take me another 90,000 miles no matter what.

Speaking of bald: My daughter asked me to teach her how to cut hair today, using her friend as guinea pig. He has a scar that leaves him with a bit of a bald spot if the barber isn’t careful, so she was doubly worried.  Her brothers won’t let her-plus-scissors anywhere near them–and believing, as my mother did before me, that barbering is a crucial skill for all frugal women to possess, I was happy to oblige. Between haircuts for  five boys and one husband, I’ve saved a lot of money over the past twenty years. More than enough to pay for those new tires.

Her friend was very patient, and no, he did NOT walk away bald. It took her a while, but she did a good job. She’ll get faster. And she has a friend who will let her practice cutting his hair.  He also once took her shopping for a prom dress and sat outside every bridal shop in Spokane, waiting for her to try on and make up her mind about every formal gown the retail industry has in stock.  Without complaining once. I’m pretty sure that’s deserves some kind of medal of honor.

Speaking of things that are not bald: my daughter also brought home her ceramics projects from art class this year. I’m accustomed to charming little items like this: 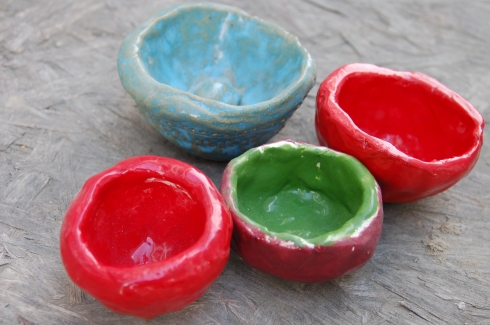 Every other year or so, one of my children brings a hand-formed bowl home. I keep them on my bookshelf and they make me smile.

My daughter brought me a head. Check out the hair on this guy: 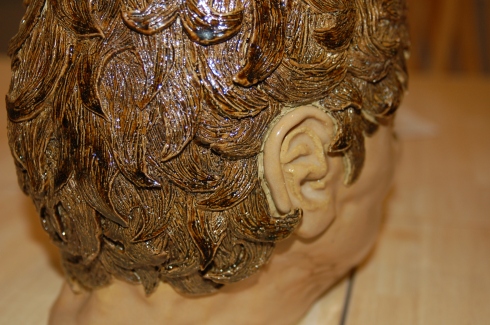 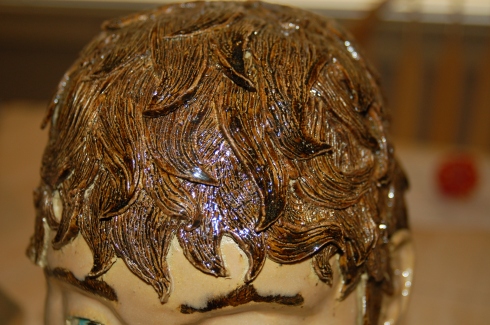 I think she was trying to make up for never bringing home a bowl, because she also brought me an architecturally-accurate  replica of the Sandpoint cabin we visit every year–which, inexplicably, I don’t have a picture of–and the head of a hippopotamus. Which is bald. And also little bit creepy if he stares at you long enough: 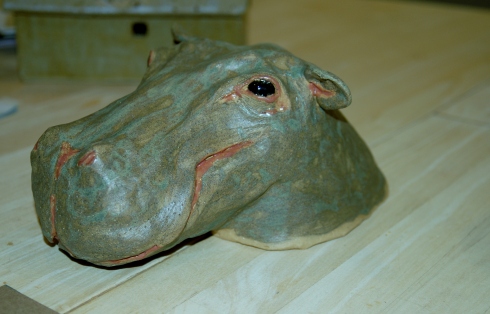 This entry was posted on Saturday, July 28th, 2012 at 9:38 pm and posted in Uncategorized. You can follow any responses to this entry through the RSS 2.0 feed.
« When I Say I Live in a Desert…
The Left end of the Stick »