A Brother, A Dremmel, a Blowdryer and Exhibit A

Now that you’ve been acquainted with my true feelings regarding the pinewood derby, I am prepared to fill you in on the details of the past evening.

Let’s just say I repented at the last minute.

As in: I sent my daughter to the sporting goods store to purchase the loathsome block of wood with its accompanying wheels, nails and anguish, the day before the race.

This rash bit of behavior may or may not have had to do with the conversation I had with my seven year old on Sunday:

“If love is spelled T-I-M-E, why don’t you do more stuff with me?” (And you thought he wasn’t listening to that brilliant bit of oratory.)

He isn’t actually in scouts yet, but his brother is and mother guilt has a way of seeping into everything, as you know.

We bought the block. A couple pencils, a Dremmel wielding older brother, and a pocket knife later, we had a car. Twenty minutes before the race started we enlisted the help of his sister’s  hair dryer:

That’s the Dremmel wielding older brother. Can I just ask you to check out that spoiler? This car is carved out of one piece of wood. I didn’t know we had tools that could do such things.

There were several cousins in the race, which was excellent, because they are under the same curse of the derby Gods that we are. Two of them with Quinton, last night (there were four): 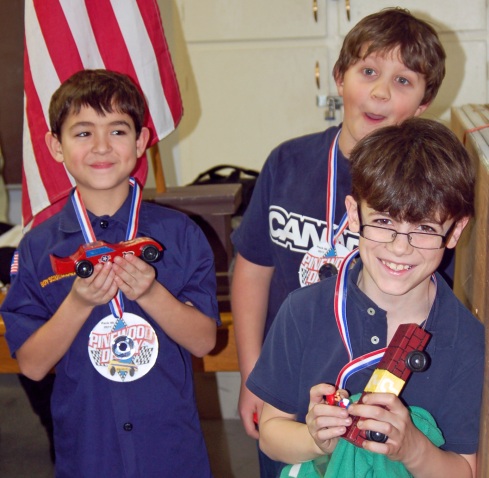 Once again the powers that be had about a billion heats, all specifically designed to demonstrate that our cars would lose against every car, every time. The in-laws who are responsible for these cousins, and I, sat on the back row and talked about everything but the race and then we decided that love was actually spelled i-c-e-c-r-e-a-m and we went to DQ (and yes, that giant Arctic Rush belongs to that little elf there to my right; he was certain he could finish it): 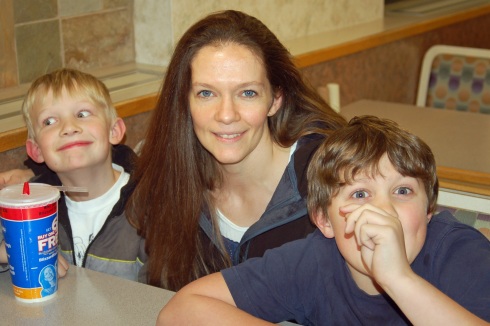 My newest sister-in-law offered to take a picture, and I demurred, but then I figured I could use some hard evidence of the fact that I did indeed spend at least one night at a derby and at DQ of my own free will and choice. And look at those smiles: See? You did have a happy childhood; I insist that you acknowledge it…

This entry was posted on Wednesday, February 16th, 2011 at 5:40 pm and posted in World View Wednesdays. You can follow any responses to this entry through the RSS 2.0 feed.
« Fickle Phone
Family Subtrefuge »

4 responses to “A Brother, A Dremmel, a Blowdryer and Exhibit A”