On March 19, 2003 I was curled up in a hospital bed with my sixth child in my arms. The nurse who brought me lunch flipped on the television and asked me if I’d heard: President Bush had just declared war.

My youngest son has never known a world without war. Thank God he has never really known it–that we live in a nation where war is something on the television screen and some place that friends and uncles disappear to for long periods but they always come back.

This picture is probably four years old, but for all the conflict around him, he still radiates joy (okay, most of the time):

He’s also the one who lets you know when he’s radiating something else more sinister, but lets not search the archives for those photos, though I’m sure I have some. This one, from when he was almost two is one of my favorites: 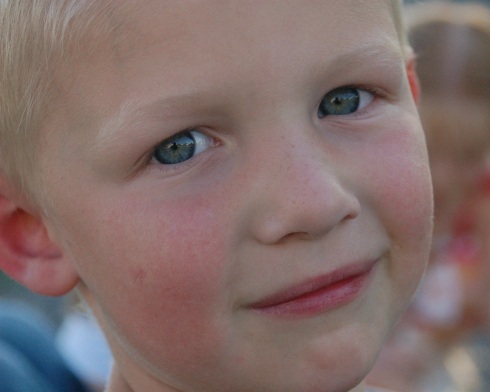 Don’t his eyes just kill you? Milk blue, I call them. He was born with that strawberry mark on his right cheek; I had many old women ask me when I was going to have it removed, but it never bothered me, and now it’s almost gone.

He’s my only blonde and is somewhat self conscious about it; in the summer he’s a real towhead. He’s also the closest to his dad, I think. I could post dozens of pictures of those two in a tangle:

Christmas morning (he said he only wanted one thing for Christmas this year, and um…yup, everyone took him at his word):

This is him today, January 1, 2011 (yes, Angie, those are the pants you gave him last Christmas, no, he has not grown more than an inch in twelve months):

He’s currently more than a little obsessed with Legos. See that blue bucket? He has THAT MANY Legos. A real joy to pick up, let me tell you. He is very ingenious with the models, though. The airplane and the helicopter are sets he got for Christmas, but usually he invents cooler models on his own. He can play for hours and hours with those things–which explains why I don’t just vacuum them all up, tempting as that may be!

Winslow is my friendly child–he gets along with every one, and isn’t scared to talk to adults or kids of any age–my others are pretty reserved. (Okay, really, really reserved.) I don’t know if it’s because by the time he started developing social skills I was doing daycare and he was constantly presented with new faces in a safe environment, or what.

He started soccer this past fall and had a great coach, thank goodness. Their team did really well, but he has fun and he works up a sweat and that’s all that matters, in my book. He’s in second grade–Annie Shuler’s class–this year, and he is an excellent reader and mathematician. He struggles to keep his letters all facing the same direction still, which makes his reading ability even more impressive.

This entry was posted on Saturday, January 1st, 2011 at 2:41 am and posted in Saturday Spotlight. You can follow any responses to this entry through the RSS 2.0 feed.
« Renovations
Bread on the Water »